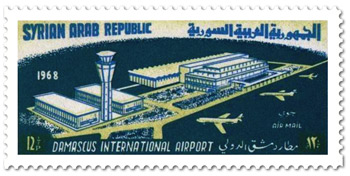 Damascus International Airport (IATA code: DAM, ICAO code: OSDI), is the main airport of Syria and the one serving the Syrian capital. Decided in 1965, its construction was completed three years later. It is a French consortium that has been chosen to implement all the works.

Photo : commemorative stamp of the 1968 inauguration of Damascus International Airport.

The airport has two passenger terminals: a terminal for domestic flights and a terminal for international flights. A third terminal whose construction has been postponed due to external aggression will soon see its work begin to increase the airport's capacity to 16 million passengers a year.

Two runways of 3600 meters (11800 feet) allow a smooth and permanent air traffic. The national airline SyrianAir (Syrian Arab Airlines) has made the international airport of Damascus its hub.

Check the flight display board for arrivals and departures at the Damascus airport. Stay informed of delays and cancellations bookmarking this page :

Weekly timetable of flights from and to Damascus airport

Read ratings and reviews of others passengers and write your own